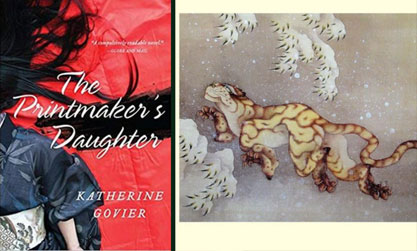 The Yoshiwara, Edo, Japan. 1806. Dawn approaches in the nightless city. Hokusai, who at 46 is already the “Old Man”, has been painting in the “pleasure district”, more accurately called the brothel district. His daughter is with him. Ei’s six-year-old eyes take in everything— sad courtesans behind the lattice, lantern-lit assignations, drunken samurai, boy actors from the kabuki theatres soliciting, tattoo artists erasing the mark of the criminal. Hokusai heads toward Turning Back Bridge for home, with his daughter on his back.
At the bridge, they meet Shino, a young yakko, the disgraced wife of a nobleman sentenced to serve time as a courtesan. Entering the Yoshiwara, she surrenders her weapon, a naginata, and stands in the cold beside the canal while the brothel owner examines her. Hokusai sketches her and Ei speaks to her. But soon she is led away.